Click right up for the newest print show on Earth

With all physical events closed for the foreseeable future, RBM believes there is room for a virtual print exhibition.

A new print exhibition will open in June if all goes well. The 10,000m2 show is not located in Dusseldorf, or Birmingham nor any other location currently closed down to prevent the spread of Covid-19. Instead the Printing Expo is taking place in the cloud as a virtual exhibition which will be open at all hours, 365 days a year.

Wayne Beckett and Chris Watson, co directors of Resolve Business Management, are behind the concept. They have combined with IndustryExpo to fill a gap left by the postponement of Fespa and Drupa. The pair believe that there is an appetite among suppliers to find ways to show off products that had been due to launch in Germany in June and are betting that a 3D rendered virtual show is better than none.

Beckett has previously worked for Ipex and other trade shows and says that the new event will mirror as much as possible the reality of attending an IRL show. Exhibitors can book a certain amount of space and fill that with a 3D designed stand, a number of which will be ready for shows that will now not take place, says Beckett.

They can provide literature pick up points, demonstrations via video, the opportunity to chat to visitors and more. Visitors will register before entering the show and their details passed to exhibitors when downloading brochures or triggering a video through any number of hot spots on a stand.

Navigation is via a Google like series of arrows, while three quarter overviews of the hall and flat plans will help visitors find the booth they want to get to. Exhibitors will pay per virtual square metre, just like a conventional event. Some participants will opt for a double decker stand (no building regs, no stand fitters and none of the extras beloved of exhibition centres), while others can choose a 3.3 metre shell scheme.

The technology is being used on the Industry Show, an ‘event’ which went live earlier this year even though it is located in the cloud. “We went to see the technology platform a couple of weeks ago, and liked the potential of what we saw,” he says.

“We have already had numerous inquiries, including from one of the largest digital print companies that is supplying a 3D graphic of their latest press. They are talking to us about replicating their Drupa stand.

“We are talking to all the trade associations and will have a seminar area where they can run a presentation programme. This is driven in the same that a normal show would be driven.But it will not replace the physical shows.”

The aisles of the event will remain ghostly and devoid of other visitors or people manning the stands. Chance encounters will be missing as will the excitement created by the buzz of the crowd, and anyone used to video games will be expecting an assailant to appear at any time. But in a year when the expected industry event programme has been devastated, virtual reality may prove better than nothing. 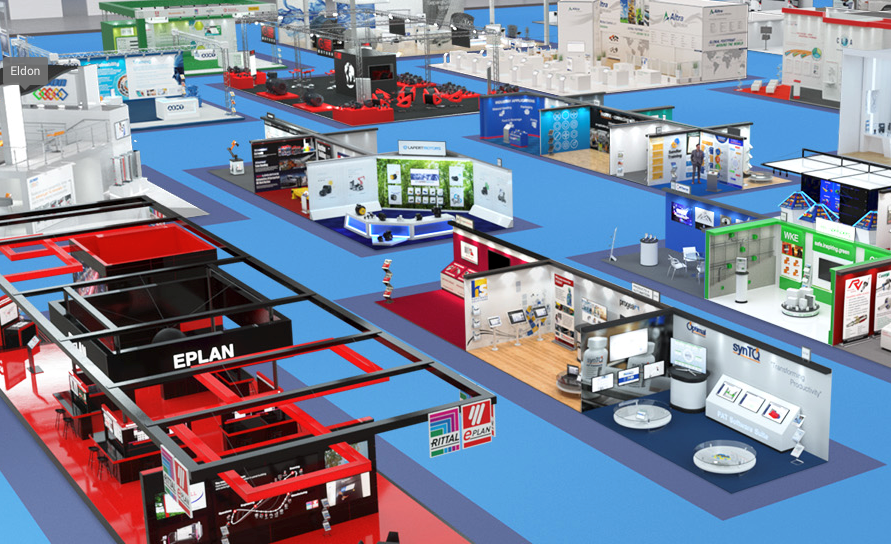